Maria Demertzis is Deputy Director of the Brussels based think tank Bruegel. 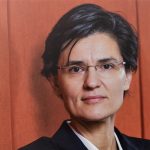 So, Brexit got done. The UK is no longer a member of the European Union. What happens in the next 11 months will dictate the UK’s economic landscape for decades to come, explains Maria Demertzis, Deputy Director of Bruegel. Now negotiators must move on to harder things. To quote a famous British Europhile, ‘…this is not the end. It is not even the beginning of the end. But it is perhaps, the end of the beginning.’

The UK has lost all its representation in EU institutions but, at least till the end of December 2020, it must comply with all EU regulations. For a little while then, everything continues as is, except the UK has no say, including in what decisions the EU takes between 1 February and the end of the year. Compromises hammered out in the next 11 months, by both British and European negotiators, will dictate the UK’s economic landscape for decades to come.

The UK would, understandably, want to limit this period as a pure rule-taker. But this depends on whether there will be an agreed relationship by the end of this year.

The UK has lost all its representation in EU institutions but, at least till the end of December 2020, it must comply with all EU regulations.

Can it be done? If this deal refers to just trade issues then any agreement made will have to be ratified by the Council and European Parliament only. And yet, if it is more than just a bare-bones trade deal, but refers to any other issues, national parliaments will in all likelihood need to be consulted. This is a much more complicated and time-consuming process.

So, what can the UK achieve in what is arguably a tight schedule?

The UK will be driven in its demands by the Brexit rationale for regulatory divergence. Mark Carney, the governor of the Bank England, argues in these terms for financial services. As one of the world’s major financial centres, the argument goes, the City of London should aim to go its own way. Given that the UK is leaving the EU, it should aim to maintain and expand the relative advantage it has in the financial sector, the way it sees fit.

So, perhaps an agreement on financial services is within the realm of what is possible.

But what about trade? The UK will be looking to stay as close to the EU’s single market as it possibly can. The EU will want to accommodate that provided the UK accepts its rules. Here incentives are not as aligned however. The EU is unlikely to budge as it has the upper hand in the negotiations. By leaving the EU, the UK risks losing 27 markets. This reflects about half of its trade. The EU just risks losing one market, has less to lose and is not prepared to risk the integrity of the single market.  Can then the UK accept regulatory alignment in return for seamless trade?

By leaving the EU, the UK risks losing 27 markets. This reflects about half of its trade.

The chances are that it won’t. But nor can it afford to have no deal by the end of the year that would require prolonging its rule-taker status. That would mean that the only way forward is aiming to have a narrow deal on very specific sectors within the year, but then pursue regulatory divergence for the rest.

The only way forward is aiming to have a narrow deal on very specific sectors within the year, but then pursue regulatory divergence for the rest.

Together with some agreement on financial services this might suffice to declare a political victory. But it will be economically poor as it will not have avoided trade disruptions. This will have consequences for British industries and eventually the economy. But also, it could exacerbate the divergence between London, that will have been allowed to continue to thrive, and the rest of the country that will lose the benefits of frictionless trade. Ironically, this was one of the arguments that fed the Brexit cause to begin with.

Role modelling Brexit? Swiss newspapers show remarkable leeway in presenting Brexit as a ‘benchmark’ for Switzerland | EU correspondents are needed to make differentiated integration accessible to the public | Is there a relationship between Facebook, fake news and support for the EU? It’s complicated | The German ‘traffic light’ coalition: no commitment to stronger spending powers for the EU | The Wider Europe: a time for experiments |