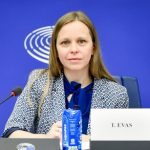 While the European Parliament (EP) is the only EU institution that is directly elected by EU citizens, its legal power to set the legislative agenda is still limited. A commitment by President von der Leyen combined with the EP’s strong calls for reform, might change this, explains Tatjana Evas. Should the European Parliament, like many national parliaments, have the power to propose new legislation? This is a central question in the debate on the democratic construction of the European Union. While the EP is the only EU institution that is directly elected by EU citizens, its legal power to set the legislative agenda is still limited. The disconnect between representation and the legislative agenda-setting has raised questions of democratic legitimacy and is viewed as one of the core democratic weaknesses of the EU.

While the EP is the only EU institution that is directly elected by EU citizens, its legal power to set the legislative agenda is still limited.

The long-standing constitutional question of the EP’s right of legislative initiative was partly dealt with in the Lisbon Treaty reform, but was not fully settled. Since then, the EP has adopted four resolutions calling on the European Commission to enhance its legislative powers. Most recently, in the 2019 resolution on EP’s power of political control over the EC and the 2019 Future of Europe resolution, the EP has reiterated its calls to strengthen this right. President Ursula von der Leyen has responded to these calls by making a clear commitment to change the current situation. In the political guidelines for the next European Commission (2019-2024) she stated:

Von der Leyen’s political support could be the final missing piece for the EP to exercise its right of legislative initiative.

Meanwhile, the European Parliament has taken several steps to increase its right of legislative initiative in recent years in the framework of the existing Treaty provisions.

First, the EP has successfully institutionalized and substantiated its right of indirect initiative in soft law.

The EP has used its traditional political networks and negotiations to further strengthen and operationalize the right of indirect legislative initiative through the 2016 Inter-institutional Agreement on Better Law-Making (IIA). This is an agreement between the European Commission, the European Parliament and the Council of the EU aimed at improving the way the Union legislates, and ensuring that legislation better serves citizens and businesses.

‘The Commission will give prompt and detailed consideration to requests for proposals for Union acts made by the European Parliament or the Council pursuant to Article 225 […] The Commission will reply to such requests within three months, stating the follow-up it intends to give to them by adopting a specific communication. If the Commission decides not to submit a proposal in response to such a request, it will inform the institution concerned of the detailed reasons, and will provide, where appropriate, an analysis of possible alternatives and respond to any issues raised by the co-legislators in relation to analyses concerning “European added value” and concerning the “cost of non-Europe”.’

The IIA, in effect, not only locks in the obligation of the Commission to reply, but also ensures a clear procedural commitment from the Commission regarding the timing of the reply and the ‘duty to reason’. Additionally, it includes a specific reference to the ‘European added value’ and ‘cost of non-Europe’. This reference is very important as it directly links to the evidence-based, technical policy-supporting mechanisms that the EP has built to enhance its capacity of initiative.

Second, the EP has developed its own institutional capacity to technically support the right of legislative initiative.

In 2011, the EP adopted a report (the Niebler Report) calling for the creation of an autonomous impact assessment structure. The report argued that impact assessments should be applied throughout the policy cycle – on both an ex-ante and an ex-post basis – from the design of legislation to its implementation, evaluation and possible revision. One dimension of the EP’s ex-ante work (support in the legislative process before the legislation is adopted) is closely linked to the right of initiative, as it provides independent analysis to support political decision-making related to the proposal of new legislation. As a follow up to the Niebler Report, the EP established a new administrative structure – Directorate General for European Parliamentary Research Service (EPRS).  A dedicated Directorate for Impact Assessment and European Added Value was created within this new EPRS structure.

The EP has internally developed and institutionalized an administrative structure to provide evidence-based support to the right of initiative.

‘evaluate the potential impacts of, and identify the advantages of, proposals made in legislative own-initiative reports by the Parliament, based on Article 225 TFEU. These assessments are undertaken on an automatic basis once the drafting of a legislative initiative report by a parliamentary committee has been authorised by the EP Conference of Presidents.’

Thus, the EP has internally developed and institutionalized an administrative structure to provide evidence-based support to the right of initiative. Together, the IIA procedural commitments and the EP internal technical capacity, have strengthened the EP’s right of indirect initiative.

Missing support at the highest level

However, the right of indirect initiative, in the current legal framework, still depends on the Commission’s acceptance on the highest political level. The capability of the EP has not yet been fully realized and this is partly a result of missing support at the European Commission’s highest decision-making level. Ursula von der Leyen has made a bold statement with an intention to change this, and has committed to responding with a legislative act when the European Parliament adopts resolutions requesting the Commission to submit legislative proposals by an absolute majority.

This political commitment could be a last missing piece and a unique opportunity for the EP to exercise its right of legislative initiative, even if there are still a lot of uncertainties how this commitment will play out in practice.