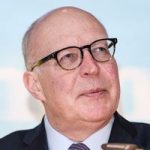 The next steps in the EU’s constitutional development must involve greater care for the wider Europe, Andrew Duff argues. He proposes the introduction of a new category of EU affiliate membership, allowing the EU’s western and eastern neighbours alike to become stable and reliable partners. Enlargement must only proceed if it enhances the EU’s own security and that of the applicants. (Illustration: Dati Bendo/European Union)

One of the more diverting exercises in literary criticism during 2022 will be the simultaneous publication of NATO’s Strategic Concept and the EU’s Strategic Compass. Why do we need two documents to define the security interests of the West? The answer, like most things, lies in history. France feared that NATO would serve to expand American influence in Europe while Britain opposed the development of a security policy under EU auspices. Brexit has helpfully removed the British blockage on Europe’s common foreign and security policy. President Macron, meanwhile, advocates European sovereign autonomy not as a substitute for US engagement but as a supplement to it. The provocations of President Putin, not least in Ukraine, stimulate the coming together of the EU and NATO.

In my recent book Britain and the Puzzle of European Union (forthcoming 2022) I propose a reform of security architecture to underpin the new alignment. A European Security Council, chaired by an EU defence minister, would combine the efforts of the two Brussels based organisations — keeping the Americans alongside while encouraging Germany to upgrade its contribution to Europe’s defence against Russia. The purpose of the Security Council is to help NATO think strategically while enabling the EU to act militarily.

An early benefit of such a new configuration would be a common policy on enlargement. NATO’s open-door policy led to the glib promise in 2008 of NATO membership to Ukraine, Georgia and Moldova as well as to the haphazard admission of Albania, Montenegro and North Macedonia — none of which has added to Europe’s security (indeed, rather the contrary). In a similar and uncoordinated spasm, the European Union in 2003 offered the prospect of enlargement to all six countries of the Western Balkans. The EU also allowed its 2014 association agreements with Ukraine, Georgia and Moldova to be portrayed as being preparatory to candidacy for membership. This lax approach was, of course, encouraged by the UK which saw eastern enlargement as a way to blunt the federal tendency in Brussels.

Subsequent events suggest that those of us who expressed disquiet at these facile promises were correct. (Indeed, one may chastise oneself for not being more outspoken against them at the time.) As I have written recently in a European Policy Centre paper Dealing with the Neighbours, there is still a basic dishonesty at the heart of the EU’s enlargement policy. All potential candidate states suffer to a greater or lesser extent from an excess of nationalism, antisemitism, ethnic and religious tension, and unstable rule by corrupt judges and politicians. Most are quarrelling with their neighbours.

The prospect of further enlargement is viewed with alarm by most of the current member states. Although the Commission has introduced stricter verification of the accession process, Emmanuel Macron makes it clear that the Union will no longer continue to amiably ignore the Copenhagen enlargement criteria. Even were the technical accession requirements to be met, the EU’s rule of rigid unanimity (involving 27 national parliaments or referendums) poses an insuperable obstacle to actual enlargement (Art. 49 Treaty on European Union, TEU).

The problem, however, goes deeper. It is not only the case that the potential candidates are ineligible for membership, but also that the government of the EU itself is so muddled and inept that it cannot possibly shoulder the burden of running the Western Balkans or face Kremlin aggression with a united front. Failure to proceed with political reform of the Union since 2005 has rendered it incapable of enlarging. The time is over when the Union could pretend to welcome applicants when they pretended to be ready.

I have proposed that at the next revision of the EU treaties a new category of affiliate membership is created (Art. 49a TEU). This would allow those European states which commit to the values of the EU and fall within its regulatory orbit but which do not espouse the goal of political, economic and monetary union to become stable and reliable partners.

For the EU’s western neighbours — Iceland, Norway, Switzerland and the UK — affiliate membership would imply an upgrading of their present, different, unsatisfactory association or free trade agreements. Partial official engagement of the affiliate states with the political, administrative and judicial institutions of the Union would enable the partnership to develop in a stable, legitimate and democratic fashion. Some attributes of EU citizenship could be shared with affiliates in a spirit of good neighbourliness (Art. 8 TEU). Full participation in EU spending programmes could be envisaged. Affiliate status should be regarded as a durable settlement rather than a springboard for full membership.

For the EU’s eastern neighbours, affiliate membership would encourage economic and political convergence on EU norms without the challenge of leaping improbable hurdles involving the ultimate sacrifice of national sovereignty. It should encourage regional collaboration between, for example, Albania and Serbia. It would allow for closer political cooperation with Brussels and the systematic joint management of EU funding. Affiliate EU membership underpinned by the European Security Council would provide eastern Europe with an unprecedented level of stability and security.

Affiliate membership would also offer, should it be needed, a parking place for any current EU member state that sought to dissociate itself from an EU on the path towards federal union. Relegation to affiliate status would avoid the humiliation of secession (Art. 50 TEU).

Working on the same assumption that the EU’s present enlargement policy is bust, the Centre for European Policy Studies has published a comparable but alternative proposal to mine. Michael Emerson, Milena Lazarevic, Steven Blockmans and Strahinja Subotic suggest that the candidate states should be admitted in stages to full membership of the Union. They propose an ingenious template for gradual accession in phases, involving partial participation in EU institutions. In the final pre-accession phase, after meeting various tests, the ‘new member states’ would be admitted to the EU Council but deprived of their right of unilateral veto. It is hoped that their participation only in decisions of the Council taken by qualified majority vote (QMV) would act avant la lettre as an example for all member states to emulate. Emerson and his colleagues are more optimistic than me.

Our two papers agree on many things, however, including the necessity of treaty revision, the extension of QMV and the need for a smaller Commission. We insist that the EU should reflect more deeply than it has done on the implications of Brexit for the constitutional evolution of the Union. Enlargement is not an academic exercise: it must only proceed if it enhances the EU’s own security and that of the applicants. It can hardly be in Serbia’s interest to join a Union which is not working well.

The next steps in the Union’s constitutional development must involve greater care for the wider Europe. It’s surely time to experiment. Maybe the Conference on the Future of Europe can help. Addressing the problem of the EU’s neighbourhood — east and west — has to involve the neighbours directly in constitutional discussions. Differentiated integration does not stop at the borders of the EU 27. A European Union more confident about its own region will be in a better position to project its values and protect its interests worldwide.