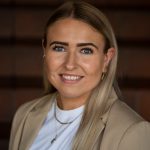 In her EU3D-funded master’s thesis, Marte Christophersen Haugen explored how Brussels offices representing regions work and interact at the European level. The results show that being from a non-member state or a geographical periphery does not hinder regions’ activity in Brussels. What matters, Marte argues, is a proactive presence and active networking as well as continuity, long-term thinking, and specialization in the work. The Arctic regions of Norway are proactive in their work towards the EU, writes Marte Christophersen Haugen. Picture from Tromsø, Norway. Illustration photo: Kirk K.

Today, more than 300 European sub-national units have an office in the European Union’s (EU) capital. These offices provide regions with a unique opportunity to be active inside the EU. Such regional activity can manifest itself both in collaboration with the state level and more independently without the state, where a combination of both seems to be most effective.

Norway is not an EU member, but all Norwegian counties are represented in Brussels and engaged in different activities in the EU. Regions from both EU-members and non-members have found ways and methods to work strategically to acquire relevant cooperation partners, monitor EU policy, find funding opportunities, and even directly influence EU policy.

The Norwegian regions have this unique opportunity because they have access to parts of the EU system that are closed to other Norwegian actors: access they get through participating in cross-border networks in collaboration with other regions from member states. Their position as one of the most closely affiliated partners to the EU also sets Norway apart from other non-member states.

To explore how these regional offices work and interact at the European level, I interviewed 18 people including EU parliamentarians, government officials, employees at the four offices and members/owners of these offices. Two of these offices were representing the metropolitan area, and two were representing the periphery and far north in their respective country. Such research design allowed me to compare the effect of two likely factors: the divides between EU members/non-members and Centre/periphery regions.

What matters for regional advocacy in Brussels?

Comparing regions from more peripheral areas to regions representing the capital areas, it becomes clear that geographical position is not as decisive as one may think, in terms of regional advocacy in Brussels. The central regions´ interests will more likely be similar to the interests of the state, which can be beneficial. Still, the regions have the same opportunities to work at a European level – it is simply more about how the region exploits its opportunity space. This study shows how regions with more peculiar interests seem to be more active with direct policy lobbying at the EU level compared to regions which are more in line with the state interests.

The empirical analysis of qualitative interviews demonstrates that regional advocacy in Brussels varies greatly. The informal route to the EU still provides a sphere for regions to operate autonomously at an EU level despite the states’ affiliation forms. Furthermore, the thesis finds that the EU clearly has a multi-level structure and that the Centre-Periphery dimension is therefore not necessarily relevant for studying regional activity in Brussels.

Presence, long-time thinking, continuity and specifying the offices’ field of work, are key for regional advocacy in Brussels. Such work demands active networking and access to informal contacts, which in turn will pay off. Accordingly, longevity in Brussels will be a great advantage in terms of regional advocacy.

The Swedish regions and regional offices are clearly well advantaged with access to local MEPs and representatives in the Committee of the Regions. Such connections provide access to important information, exclusive to the Member States. Norwegian actors must therefore work quite actively to receive this information.

In sum, one can argue that the national government remains the gatekeeper in the relationship between the state and the EU, as a state-centric perspective would argue. Still, the analysis shows how regions have gained a more prominent role and thus also found their place in a system that originally was a project of cooperation between different states – traditionally leaving the regions behind.

With the establishment of the Committee of the Regions and the inclusion of regions in the treaties that the EU is based upon, one can witness a change into the EU system and how regions are incorporated in the EU. The traditional intergovernmental way of addressing the EU from a state-centric perspective is thus no longer sufficient to explain the EU. Different theoretical paths must therefore be used, to be able to explain a larger and more complex phenomenon such as regional mobilization in Brussels.

The case of the Artic

Norwegian regions participate in cross-border networks that give them opportunities to become part of something bigger. All Norwegians regions have such opportunities, but the Arctic regions seem to be quite proactive in their work towards the EU. The regions in the north have traditionally and historically had close ties through their common challenges and opportunities. Such close ties extend across national borders and unite these regions to national and supranational authorities.

Through the common interregional network called Northern Sparsely Populated Areas (NSPA), the Norwegian regions in the north are given a voice towards the EU. This engagement is driven by a strong political will in the region and a common understanding that these regions must work actively to avoid a potential gap based on their common challenges linked to rough climates, long distances, and a scattered population.

The study shows that the Swedish and Finnish parliamentarians in the EU institutions representing the northern regions of Sweden and Finland work on behalf of the whole north Scandinavian community. The regions of north Norway thus have a huge advantage through their close ties with high-ranking politicians. The Arctic has also been given much more attention in the EU compared to earlier, so the arctic regions` relation to the EU is very much described as an interdependent relationship. The Centre-Periphery dimension is thus less relevant regarding these regions´ work toward the EU.

This research is published as EU3D Report 6, “Regional Presence in the EU: A Qualitative Study of Regional Offices’ Activity in Brussels”.

The Crisis of Stability and the Idea of Europe Today | In Search of Europe’s Government | A Southern Perspective on EU Enlargement | Role modelling Brexit? Swiss newspapers show remarkable leeway in presenting Brexit as a ‘benchmark’ for Switzerland | EU correspondents are needed to make differentiated integration accessible to the public |

Regional Activity in Brussels: A Matter of Informal Contacts, Networking and Presence | Is there a relationship between Facebook, fake news and support for the EU? It’s complicated | Why the Nordic states maintain differentiated foreign policies | After the pandemic: Still Draghi vs Schäuble? | The realpolitik of the day after Brexit |